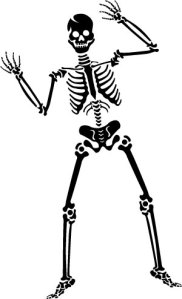 Three hundred million cells die in your body every minute

In late 19th century Egypt where wood and coal were scarce but human mummies were abundant, millions of mummies were used as fuel for locomotives

When you sneeze, all bodily functions stop, even your heart

You produce 25,000 quarts of spit in a lifetime, enough to fill two swimming pools

You were born with 300 bones, but by adulthood you have only 206

The Neanderthal’s brain was bigger than your